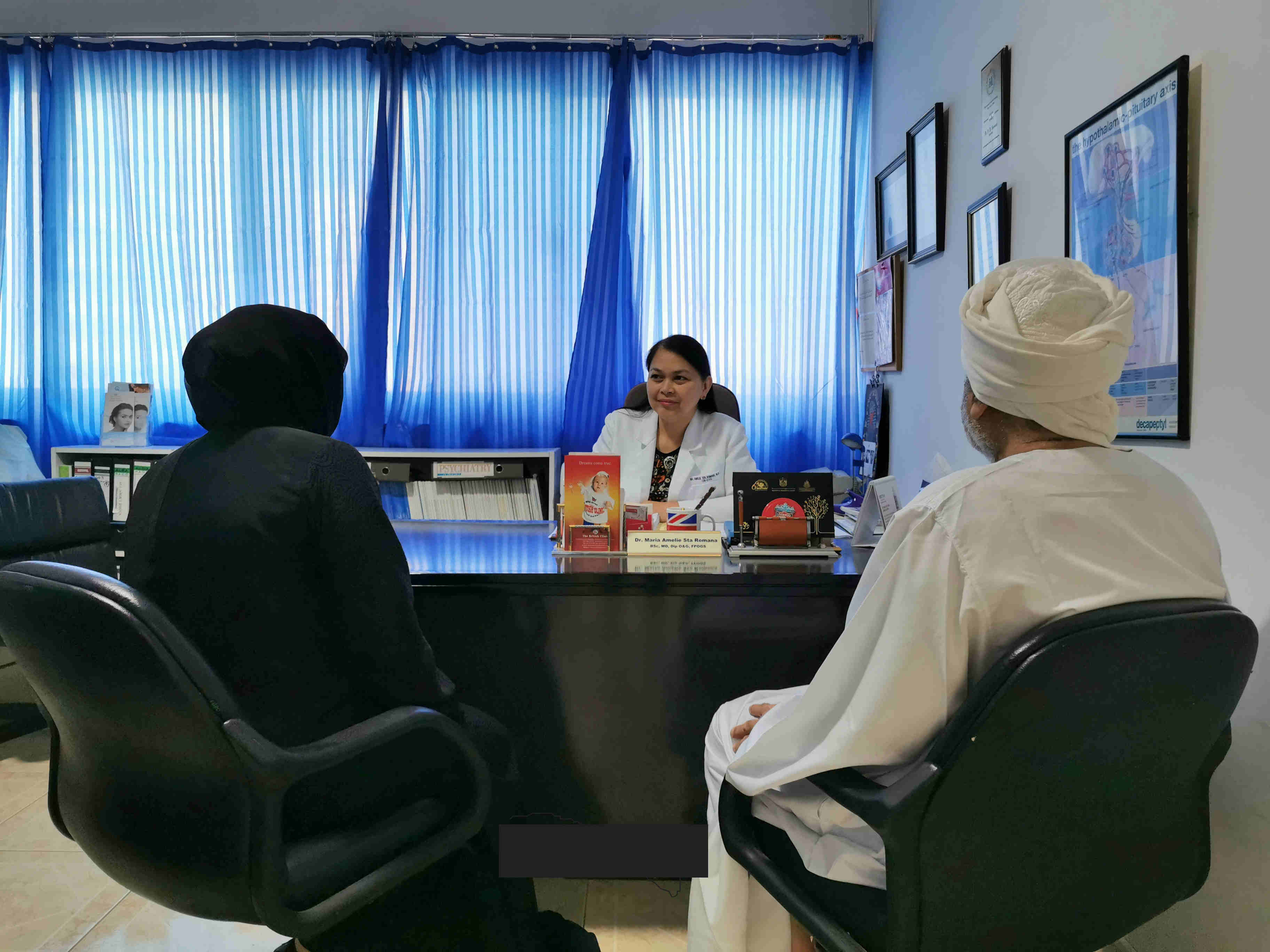 The British Clinic provides comprehensive care, emphasizing preventive health and counseling to help avoid future medical problems. Full ante-natal care with 3D / 4D Ultrasound Scanning and Non-invasive Genetic Testing, Well Women and Well Men Care, Pre-conception counseling, Genetic counseling, family planning as well as general gynecology are provided. The general gynecology care is provided for women of all ages and stages of life dealing with problems of childhood, adolescence, adulthood through to the menopause and beyond ...

The hormonal changes of your menstrual cycle affect the misplaced endometrial tissue, causing the area to become inflamed and painful. This means the tissue will grow, thicken, and break down. Over time, the tissue that has broken down has nowhere to go and becomes trapped in your pelvis.

This tissue trapped in your pelvis can cause:

Endometriosis is a common gynecological condition, affecting up to 10 percent of women. You’re not alone if you have this disorder.

The symptoms of endometriosis vary. Some women experience mild symptoms, but others can have moderate to severe symptoms. The severity of your pain doesn’t indicate the degree or stage of the condition. You may have a mild form of the disease yet experience agonizing pain. It’s also possible to have a severe form and have very little discomfort.

Pelvic pain is the most common symptom of endometriosis. You may also have the following symptoms:

You may also have no symptoms. It’s important that you get regular gynecological exams, which will allow your gynecologist to monitor any changes. This is particularly important if you have two or more symptoms.

Understandably, you want quick relief from pain and other symptoms of endometriosis. This condition can disrupt your life if it’s left untreated. Endometriosis has no cure, but its symptoms can be managed.

Medical and surgical options are available to help reduce your symptoms and manage any potential complications. Your doctor may first try conservative treatments. They may then recommend surgery if your condition doesn’t improve.

Everyone reacts differently to these treatment options. Your doctor will help you find the one that works best for you.

It may be frustrating to get diagnosis and treatment options early in the disease. Because of the fertility issues, pain, and fear that there is no relief, this disease can be difficult to handle mentally. Consider finding a support group or educating yourself more on the condition.

You can try over-the-counter pain medications such as ibuprofen, but these aren’t effective in all cases.

Taking supplemental hormones can sometimes relieve pain and stop the progression of endometriosis. Hormone therapy helps your body regulate the monthly hormonal changes that promote the tissue growth that occurs when you have endometriosis.

Hormonal contraceptives decrease fertility by preventing the monthly growth and buildup of endometrial tissue. Birth control pills, patches, and vaginal rings can reduce or even eliminate the pain in less severe endometriosis.

The medroxyprogesterone (Depo-Provera) injection is also effective in stopping menstruation. It stops the growth of endometrial implants. It relieves pain and other symptoms. This may not be your first choice, however, because of the risk of decreased bone production, weight gain, and an increased incidence of depression in some cases.

GnRH therapy has side effects like vaginal dryness and hot flashes. Taking small doses of estrogen and progesterone at the same time can help to limit or prevent these symptoms.

Danazol is another medication used to stop menstruation and reduce symptoms. While taking danazol, the disease may continue to progress. Danazol can have side effects, including acne and hirsutism. Hirsutism is abnormal hair growth on your face and body.

Other drugs are being studied that may improve symptoms and slow disease progress.

Laparoscopy, a minimally invasive surgery, is used to both visualize and diagnose, endometriosis. It is also used to remove the endometrial tissue. A surgeon makes small incisions in the abdomen to surgically remove the growths or to burn or vaporize them. Lasers are commonly used these days as a way to destroy this “out of place” tissue.

Rarely, your doctor may recommend a total hysterectomy as a last resort if your condition doesn’t improve with other treatments.

During a total hysterectomy, a surgeon removes the uterus and cervix. They also remove the ovaries because these organs make estrogen, and estrogen causes the growth of endometrial tissue. Additionally, the surgeon removes visible implant lesions.

A hysterectomy is not usually considered a treatment or cure for endometriosis. You’ll be unable to get pregnant after a hysterectomy. Get a second opinion before agreeing to surgery if you’re thinking about starting a family.

During a regular menstrual cycle, your body sheds the lining of your uterus. This allows menstrual blood to flow from your uterus through the small opening in the cervix and out through your vagina.

The exact cause of endometriosis isn’t known, and there are several theories regarding the cause, although no one theory has been scientifically proven.

One of the oldest theories is that endometriosis occurs due to a process called retrograde menstruation. This happens when menstrual blood flows back through your fallopian tubes into your pelvic cavity instead of leaving your body through the vagina.

Another theory is that hormones transform the cells outside the uterus into cells similar to those lining the inside of the uterus, known as endometrial cells.

Others believe the condition may occur if small areas of your abdomen convert into endometrial tissue. This may happen because cells in your abdomen grow from embryonic cells, which can change shape and act like endometrial cells. It’s not known why this occurs.

These displaced endometrial cells may be on your pelvic walls and the surfaces of your pelvic organs, such as your bladder, ovaries, and rectum. They continue to grow, thicken, and bleed over the course of your menstrual cycle in response to the hormones of your cycle.

It’s also possible for the menstrual blood to leak into the pelvic cavity through a surgical scar, such as after a cesarean delivery (also commonly called a C-section).

Some believe endometriosis might start in the fetal period with misplaced cell tissue that begins to respond to the hormones of puberty. This is often called Mullerian theory. The development of endometriosis might also be linked to genetics or even environmental toxins.

Endometriosis has four stages or types. It can be any of the following:

Different factors determine the stage of the disorder. These factors can include the location, number, size, and depth of endometrial implants.

The symptoms of endometriosis can be similar to the symptoms of other conditions, such as ovarian cysts and pelvic inflammatory disease. Treating your pain requires an accurate diagnosis.

Your doctor will perform one or more of the following tests:

Your doctor will note your symptoms and personal or family history of endometriosis. A general health assessment may also be performed to determine if there are any other signs of a long-term disorder.

During a pelvic exam, your doctor will manually feel your abdomen for cysts or scars behind the uterus.

Both types of ultrasound provide images of your reproductive organs. They can help your doctor identify cysts associated with endometriosis, but they aren’t effective in ruling out the disease.

The only certain method for identifying endometriosis is by viewing it directly. This is done by a minor surgical procedure known as a laparoscopy. Once diagnosed, the tissue can be removed in the same procedure.

Having issues with fertility is a serious complication of endometriosis. Women with milder forms may be able to conceive and carry a baby to term. According to the Mayo Clinic, about 30 – 40 percent of women with endometriosis have trouble getting pregnant.

Medications don’t improve fertility. Some women have been able to conceive after having endometrial tissue surgically removed. If this doesn’t work in your case, you may want to consider fertility treatments or in vitro fertilization to help improve your chances of having a baby.

You might want to consider having children sooner rather than later if you’ve been diagnosed with endometriosis and you want children. Your symptoms may worsen over time, which can make it difficult to conceive on your own. You’ll need to be assessed by your doctor before and during pregnancy. Talk to your doctor to understand your options.

Even if fertility isn’t a concern, managing chronic pain can be difficult. Depression, anxiety, and other mental issues aren’t uncommon. Talk to your doctor about ways to deal with these side effects. Joining a support group may also help.

Disclaimer The British Clinic does not accept any liability to any person for the information or advice (or use of such information or advice) which is provided in this website or incorporated into it by reference. We provide this information on the understanding that all persons accessing it take responsibility for assessing its relevance and accuracy. Healthcare seekers are encouraged to discuss their health needs with their carers.

The British Clinic has the right to decline and refuse to see any individual who they deem they are unable to help.